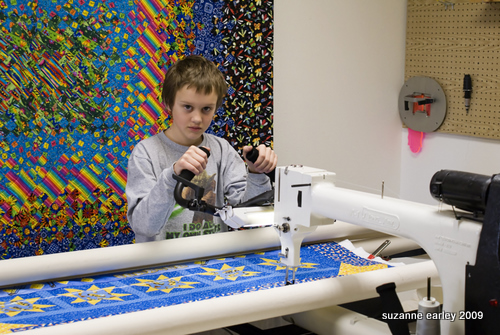 In case you can’t tell, that look says “You are not seriously going to take my picture, are you?” 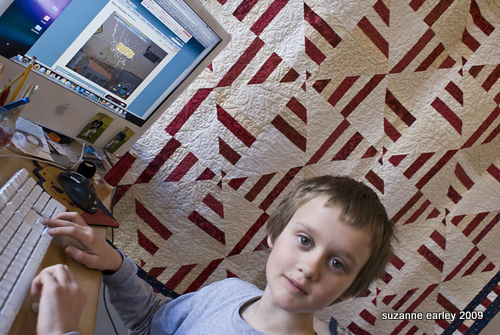 That looks says “Hey, a guy can’t quilt an entire quilt at one go.  He needs to take a break, stretch his finger muscles out, before he can give the rest of the quilt his full attention.”

That quiltings says “Joe 09” — because all artists have to sign their work.

Joe’s meandering doesn’t show up very well in photos, I’ll try to take some other shots in better light.

I bought this as a kit last year, with a certain young male relative in mind.

I showed Joe the picture of the quilt and asked if he’d be OK with it as his quilt show entry.  He contemplated it a bit, and then said “Colin likes construction stuff, right?”

(Colin is his 3 year old cousin, the one I had in mind…but I didn’t tell Joe that…).

Joe informed me that he would like to quilt it, and that when it was done wiht it’s trip to New Hampshire, we should give it to Colin for his birthday.

I think I might be winning the battle to turn them into civilized human beings.

Just remind me of that the next time they giggle hysterically over their bodily noises.