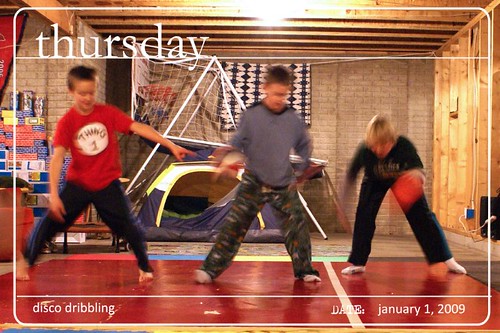 finally found what I was looking for, though not in the place i was expecting it.  i had seen this photo frame on a blog sometime in the last…month or so…which meant it was really easy to find.

finally found it on the website of the digital scrapbooking site where i could actually buy the set of frames (and it was pure dumb luck that i actually ended up there).

yes, i was going to go to bed, but i just really wanted to find these frames.

i don’t “do” new year’s resolutions, but i’m going to try this daily photo thing again.

we’ll see how it goes.

(the photo is actually quite terrible, but i still like it.  i never figured out why will never got dressed today.  or why joe doesn’t have socks on.  all 3 (the third kid is their cousin ben) have basketballs, but you can’t even see the blur that is joe’s ball…they were doing a silly Disco Dribbling thing, which is why Joe is pointing — dribble with one hand, point with the other, then switch hands (sort of a staying alive disco move…))

and now, i am truly going to go to bed.  when i get lazy and don’t bother capitalizing, it usually means it’s time to quit.

p.s.  you are welcome for the ear worm in the post title. that’s something else i’m going to try to continue into the new year, the whole song title and/or lyrics as post titles.  i wonder how many people i’ll be able to annoy with them.

tomorrow’s daily photo might actually be one taken by mark, as he is going to take all 3 boys skiing tomorrow…we should probably ask his sister for a letter stating that he has permission to seek medical assistance for her son…just in case…