You are here: Home / Blog / Uncategorized / My Guitar Heroes

They’ve decided that they’d really like to learn how to play an actual guitar, so they’ve pulled out our acoustic guitar (which, unfortunately, is quite cheap and doesn’t work all that great).  They’ve decided to teach themselves, since Mom won’t spring for guitar lessons in Waterloo (a half hour drive one way). 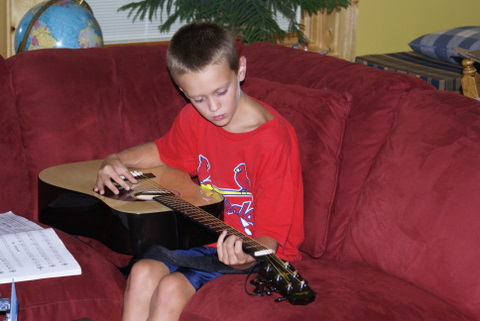 They know how to read music (at least the basics, thanks to their short piano lesson stint) and they can read and follow directions, so, Why not!  At least to get started.  If they actually figure it out, Mom and Dad might be willing to splurge on a nicer instrument.

Heck, if they both like it well enough, and keep at it, I might even be convinced to buy them their OWN guitars.

And just so this blog doesn’t descend purely into family related stuff:  here’s a tiny bit of fiber content. 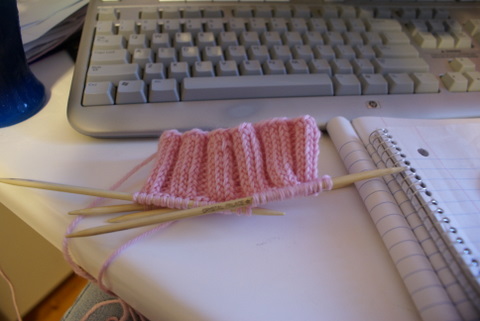 It doesn’t go very fast when you only do a needle’s worth at a time.  It’ll hopefully turn out to be a baby hat, to go with the jacket I made when we were on vacation.

I’ve also been doing some sewing of samples, I hope to post about those soon, just not ready for primetime yet.

Make note of the notebooks piled in front of my keyboard.  I’ve lost track of how many notebooks I have around that have notes and lists and STUFF in them.  I’m like a chicken with it’s head cut off, I tell ya.

I’m not helped by the confusion caused by delivery people.  The FedEx delivery person made a mistake and nicely apologized for it, but it’s meant I’ve been waiting for days longer than I should have for something. Gah.  Of course, it doesn’t help that I should have ordered said item sooner.

Anyway.  Back to work.  Or first, maybe, some lunch.  Then work.