I’ve been around computers long enough to know this rule.

I’ve been playing with my copy of Photoshop long enough to know that occasionally it will crash on me.

But darn it all, I gambled this afternoon and lost a journal page I had been working on. Luckily, it was pretty simple, and I’ll be able to recreate it fairly quickly, but let this be a lesson to all of you (and hopefully to myself).

My motto in life: if I can’t be a good example, I’ll be a terrible warning.

I’m still feeling kinda lousy:   based on the rash I’m now exhibiting on my neck and chest, it would seem that our suspicion that I have Fifth Disease is probably true.   I’m pretty sure both boys had have had it (and probably Mark, too) over the past few weeks.  Hopefully, this means I’m nearing the end of feeling yucky.  I’ve had something going for close to a month now, and I’m getting tired of hearing myself whine about feeling bad.

Before I head to bed, I will tell you that I do have 3 more pages in my journal done.  I kept up pretty well while I was gone with writing in the paper journal I took:  now I just need (want) to finish creating them as digital pages to put in my book. 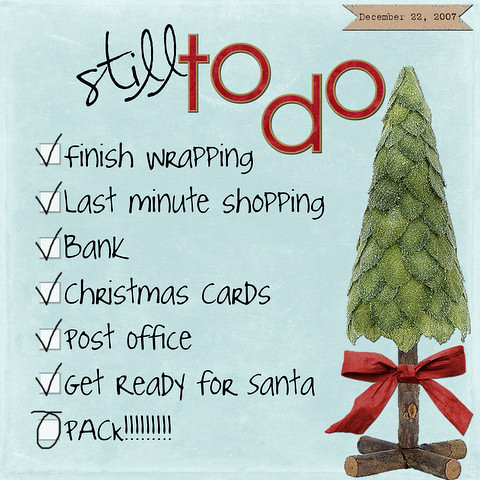 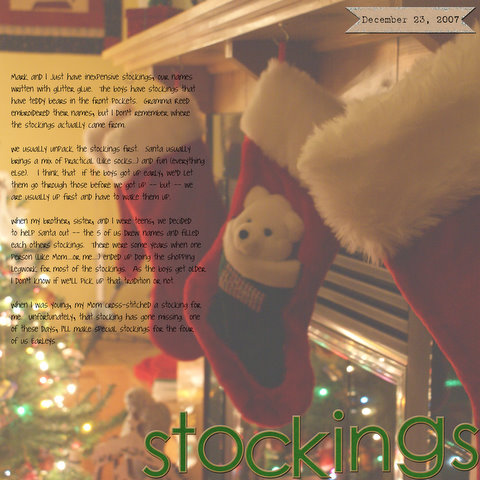 Mark and I just have inexpensive stockings, our names
written with glitter glue.  The boys have stockings that
have teddy bears in the front pockets.  Gramma Reed
embroidered their names, but I don’t remember where
the stockings actually came from.

We usually unpack the stockings first.  Santa usually
brings a mix of practical (like socks…) and fun (everything
else).   I think that  if the boys got up early, we’d let
them go through those before we got up — but — we
are usually up first and have to wake them up.

When my brother, sister, and I were teens, we decided
to help Santa out — the 5 of us drew names and filled
each others stockings.  There were some years when one
person (like Mom….or me….) ended up doing the shopping
legwork for most of the stockings.  As the boys get older
I don’t know if we’ll pick up that tradition or not.

When I was young, my Mom cross-stitched a stocking for
me.  Unfortunately, that stocking has gone missing.  One
of these days, I’ll make special stockings for the four
of us Earleys. 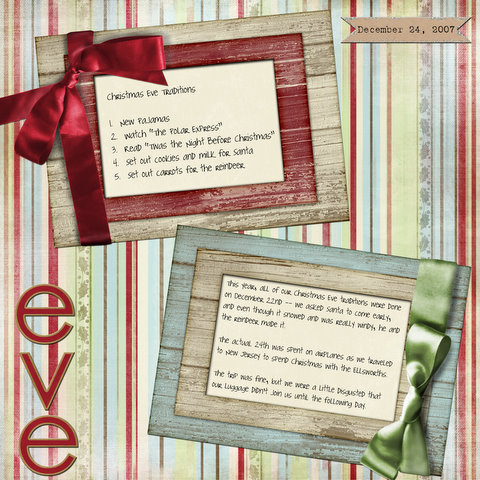 1.  New Pajamas
2.  Watch “The Polar Express”
3.  Read “Twas the Night Before Christmas”
4.  Set out cookies and milk for Santa
5.  Set out carrots for the reindeer

This year, all of our Christmas Eve traditions were done
on December 22nd — we asked Santa to come early,
and even though it snowed and was really windy, he and
the reindeer made it.

The actual 24th was spent on airplanes as we traveled
to New Jersey to spend Christmas with the Ellsworths.

The trip was fine, but we were a little disgusted that
our luggage didn’t join us until the following day.