I really was goign to go to bed, but my Christmas journal kept calling to me, and since these pages were done and I was still up, I thought I might as well go ahead and post them. I actually whipped out 3 pages this evening!

For those of you keeping track, yes, I’m jumping around and oign out of order now. I wrote some junk for the 26th, but it was kind of rambly and pointless, and I don’t know what I’m going to do about that particular day. I need to see if my brother-in-law took any pictures that day, as the ones I took were worthless.

Here’s the 26th. The prompt was to talk about changes in sleep habits over the holidays. 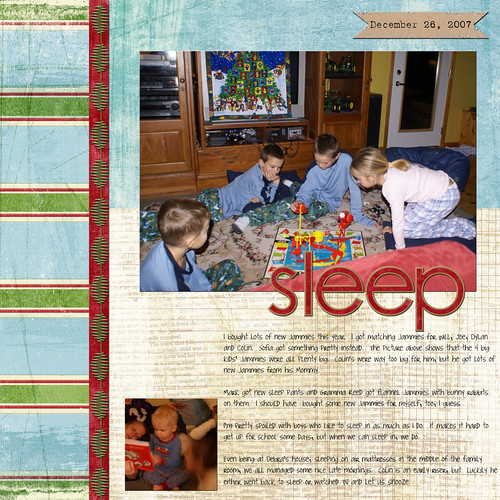 I bought lots of new jammies this year. I got matching jammies for Will, Joe, Dylan
and Colin. Sofia got something pretty instead. The picture above shows that the 4 big
kids’ jammies were all plenty big. Colin’s were way too big for him, but he got lots of
new jammies from his Mommy.

Mark got new sleep pants and Gramma Reed got flannel jammies with bunny rabbits
on them. I should have bought some new jammies for myself, too, I guess.

I’m pretty spoiled with boys who like to sleep in as much as I do. It makes it hard to
get up for school some days, but when we can sleep in, we do.

Even being at Debra’s house, sleeping on air mattresses in the middle of the family
room, we all managed some nice late mornings. Colin is an early riser, but luckily he
either went back to sleep or watched TV and let us snooze.

The prompt for the 28th was to talk about things that are special to the season, to document something in particular that only comes out once a year. I thought this would be a good place to journal about our Christmas quilts! (edited: I rearranged, and this one is now called dated the 27th) 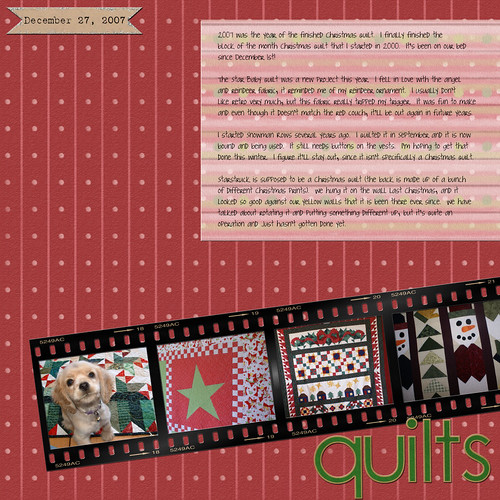 2007 was the year of the finished Christmas quilt. I finally finished the
block of the month Christmas quilt that I started in 2000. It’s been on our bed
since December 1st!

The Star Baby quilt was a new project this year. I fell in love with the angel
and reindeer fabric, it reminded me of my reindeer ornament. I usually don’t
like retro very much, but this fabric really tripped my trigger. It was fun to make
and even though it doesn’t match the red couch, it’ll be out again in future years.

I started Snowman Rows several years ago. I quilted it in September and it is now
bound and being used. It still needs buttons on the vests. I’m hoping to get that
done this winter. I figure it’ll stay out, since it isn’t specifically a Christmas quilt.

Starstruck is supposed to be a Christmas quilt (the back is made up of a bunch
of different Christmas prints). We hung it on the wall last Christmas, and it
looked so good against our yellow walls that it is been there ever since. We have
talked about rotating it and putting something different up, but it’s quite an
operation and just hasn’t gotten done yet. 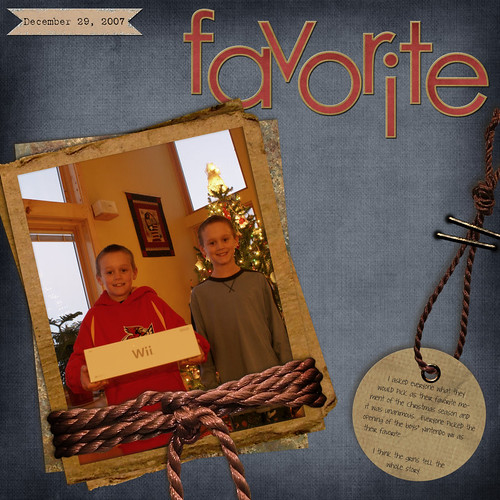 I asked everyone what they would pick as their favorite moment of the Christmas season, and it was unanimous. Everyone picked the opening of the boys’ Nintendo Wii as their favorite. I think the grins tell the whole story.

And now. I’m actually going to go to bed. Honest.