Most of the rest of my journal pages are going to be about the text — I wrote a lot when I was at my sister’s!   When I copied and pasted the text, I found some typos.  I’ve fixed my original, but the image below does have some misspellings.   Joe was looking through the printed journal one day and found at least one typo that I missed.  I should have him and Will check the whole thing for me! 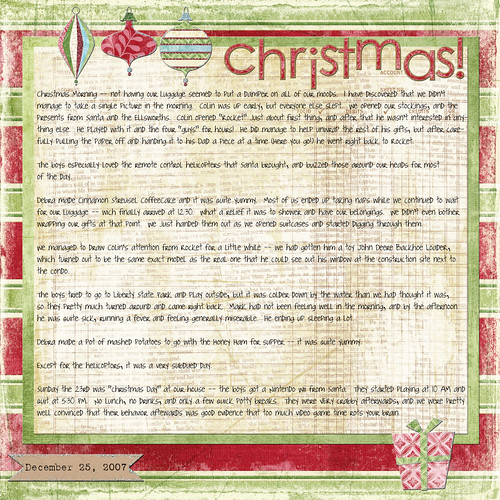 Christmas Morning — not having our luggage seemed to put a damper on all of our moods. I have discovered that we didn’t
manage to take a single picture in the morning. Colin was up early, but everyone else slept in. We opened our stockings, and the
presents from Santa and the Ellsworths. Colin opened “Rocket” just about first thing, and after that he wasn’t interested in any-
thing else. He played with it and the four “guys” for hours! He did manage to help unwrap the rest of his gifts, but after care-
fully pulling the paper off and handing it to his Dad a piece at a time (Here you go!) he went right back to Rocket.

The boys especially loved the remote control helicopters that Santa brought, and buzzed those around our heads for most
of the day.

Debra made Cinnamon Streusel Coffee Cake and it was quite yummy. Most of us ended up taking naps while we continued to wait
for our luggage — which finally arrived at 12:30. What a relief it was to shower and have our belongings. We didn’t even bother
wrapping our gifts at that point. We just handed them out as we opened suitcases and started digging through them.

We managed to draw Colin’s attention from Rocket for a little while — we had gotten him a toy John Deere Backhoe Loader,
which turned out to be the same exact model as the real one that he could see out his window at the construction site next to
the condo.

The boys tried to go to Liberty State Park and play outside, but it was colder down by the water than we had thought it was,
so they pretty much turned around and came right back. Mark had not been feeling well in the morning, and by the afternoon
he was quite sick, running a fever and feeling generally miserable. He ending up sleeping a lot.

Debra made a pot of mashed potatoes to go with the Honey Ham for supper — it was quite yummy.

Except for the helicopters, it was a very subdued day.

Sunday the 23rd was “Christmas Day” at our house — the boys got a Nintendo Wii from Santa. They started playing at 10 AM and
quit at 5:30 PM. No lunch, no drinks, and only a few quick potty breaks. They were VERY crabby afterwards, and we were pretty
well convinced that their behavior afterwards was good evidence that too much video game time rots your brain.