Again, I had the text done last night, but struggled with the layout — well, with getting the text to be in the shape of a partial circle. Also, I went through a number of choices before deciding on the paper for each layer. I keep trying to pull in other papers and embellishments, but I just really like this digital kit I’m working with. 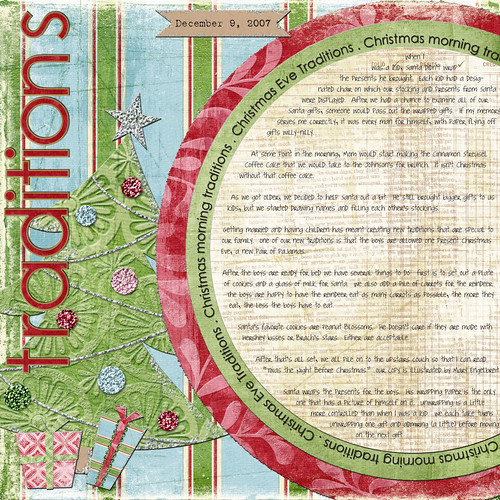 I realized after uploading it to Flickr that the background is the same as the previous day’s.  Oh well.

When I was a kid, Santa didn’t wrap the presents he brought. Each kid had a designated chair on which our stocking and presents from Santa were displayed. After we had a chance to examine all of our Santa gifts, someone would pass out the wrapped gifts. If my memory serves me correctly, it was every man for himself, with paper flying off gifts willy-nilly.

At some point in the morning, Mom would start making the Cinnamon Streusel Coffee Cake that we would take to the Johnson’s for brunch. It isn’t Christmas without that coffee cake.

As we got older, we decided to help Santa out a bit. He still brought bigger gifts to us kids, but we started drawing names and filling each other’s stockings.

Getting married and having children has meant creating new traditions that are special to our family. One of our new traditions is that the boys are allowed one present Christmas Eve, a new pair of pajamas.

After the boys are ready for bed we have several things to do: first is to set out a plate of cookies and a glass of milk for Santa. We also add a pile of carrots for the reindeer. The boys are happy to have the reindeer eat as many carrots as possible, the more they eat, the less the boys have to eat.

Santa’s favorite cookies are Peanut Blossoms. He doesn’t care if they are made with Hershey Kisses or Brach’s Stars. Either are acceptable.

After that’s all set, we all pile on to the upstairs couch so that I can read “Twas the Night Before Christmas.” Our copy is illustrated by Mary Engelbreit.

Santa wraps the presents for the boys. His wrapping paper is the only one that has a picture of himself on it. Unwrapping is a little more controlled than when I was a kid. We each take turns unwrapping one gift and admiring (a little) before moving on the next gift.

Radar shows that we should be getting hit with another round of winter storms sometime tonight.  It sounds like the states south of us are seeing some very unpleasant weather.  Please keep the Midwestern US in your thoughts!