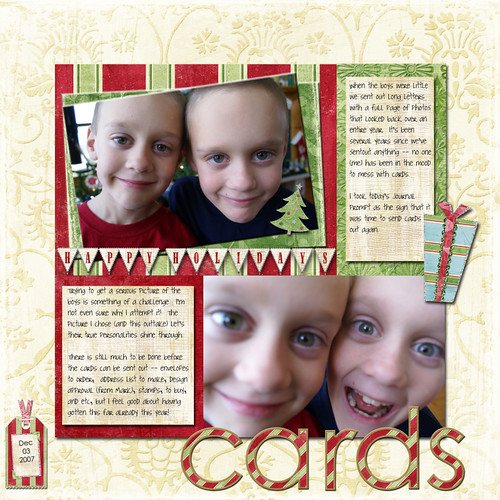 I decided to go with a slightly goofy photo for the card itself, as well as using both the card and the really goofy picture for today’s journal.

When the boys were little we sent out long letters with a full page of photos that looked back over an entire year. It’s been several years since we’ve sent out anything — no one (me) has been in the mood to mess with cards.

I took today’s journal prompt as the sign that it was time to send cards out again.

Trying to get a serious picture of the boys is something of a challenge. I’m not even sure why I attempt it! The picture I chose (and this outtake) let’s their true personalities shine through.

There is still much to be done before the cards can be sent out — envelopes to order, address list to make, design approval (from Mark), stamps, to buy, and etc, but I feel good about having gotten this far already this year!

I added the chipboard letters to make the title at the very end of the process. It wasn’t until I was doing so that I realized the irony of the word itself, and the placement over the two “cards” that were making a funny face at the camera. Even when I’m not paying attention, I’m all about the cheap puns, don’t you know???