You are here: Home / Blog / Uncategorized / A long Winter’s Nap

Apparently that’s what I needed today.

Technically it isn’t winter (yet, though the weather sure seems to think so…) and it was long, but it was just what I needed this afternoon. Usually I like to take my naps with the dog, but she was otherwise occupied — helping Mark shovel snow and chip at ice.

The poor school playground — now it’s an ice rink covered with several inches of snow. I wonder when the kids will get to go back outside for recess?

I managed a ton of quality sewing time yesterday — both teacher quilt tops are done and ready to be quilted.  I’m really pleased with how they’ve turned out — very cheerful

The cherry fabric is a Robert Kaufman print.  The green stripe looks like it was meant to go with it, but it was some random print I found at Joann’s.   I wasn’t sure how much red (or white) I was going to need when I was shopping, primarily because I had no idea what I was going to make at the time.  needless to say, I completely overbought.  Not complaining though — my reds and whites are pretty well depleted.

I also spent hours and hours and hours sewing on my cousin’s wedding quilt.  Good lord what was I thinking when I picked this block pattern?  I hate sewing triangles, and this darn Corn and Beans block has FORTY-FOUR triangles.  FORTY-FOUR.   This is the pile of 24 center sections, there are still 4 flying geese units to add to each, plus corner triangles after that.   Only 1 lonely block is actually finished.  Next up:  determining whether or not I’m going to follow my original sashing plan, which would entail a bazillions more hours of sewing.

Last thing for this overly long post:  yesterday’s Christmas Journal page.  I just realized that I didn’t put the date tag on it, yet.  Oops.  I’m thinking about doing something differently anyway, so…I meant to leave it off, right?

As I said last night, I had this journaling done, but I was having trouble getting the page finished.  I thought I was going to just zip it quick this morning, but then…I started messing, and I ended up changing some stuff.  It’s done, now, though.

I decided to use pictures of some of my favorite Christmas things, the stuff that only gets seen once a year. 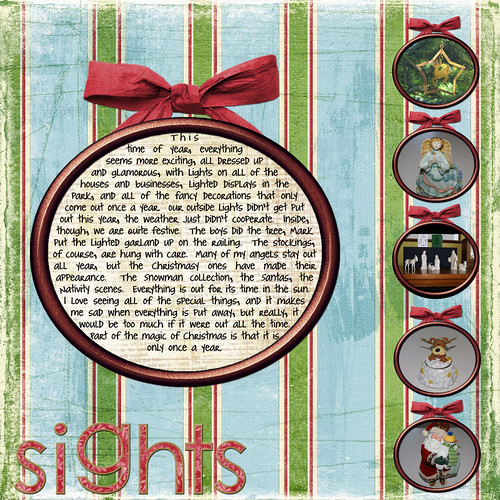