Hey! I got some Halloween decorations out more than 10 days before Halloween!  Usually it ends up being the day before Halloween and we decide it really isn’t worth it.   I was subjected to some guilt-inducing moments, though.  As the boys were putting out our various knick-knacks I heard them say things like “I’m so excited” and “This is my favorite time of the year” — I hope they don’t look back on their childhood as a time of disappointment in a Mom who didn’t have her holiday decorating act together.

What started me on my spurt of holiday cheer was finding this cute banner on a blog on Saturday. (The blog is Allsorts, here’s the direct link the post with the letters for the banner .  I need to go back and straighten out the rick-rack so that the letters lay flatter.

We bought some pumpkins the other night, the boys have been asking to carve jack-o-lanterns this year.  My husband claims that the boys and I carved pumpkins last year, but I have absolutely no recollection of that.  I can’t seem to find any photographs, which seems odd — wouldn’t you think I would take pictures if I had gone to all of the work of carving pumpkins?

I’m not sure when we are going to tackle that.  I want to find a recipe for roasting the seeds.  My husband says he’s never had roasted pumpkin seeds before.   Halloween is not his favorite holiday — I think we could skip right past it and he’d be just fine.  The boys though:  they talk about Halloween and Halloween costumes all year long.  Every week or so someone will say “I’m going to be XYZ this year.”  And I will say “That’s nice, honey.”  And I’ll know that next week XYZ will be ABC and the week after it will be LMNOP.

And I can guarantee you that that conversation will start on approximately November 1st.

As I was attempting to fall asleep last night I started thinking about Halloween memories from when I was a kid.  I don’t remember all of my Halloween costumes — I do remember in 3rd grade I was a Fairy Godmother and had the silliest get-up — it involved a pink tutu and I don’t know what else.

For several years we lived next to a family that became very close friends (back in May my Mom and I went to the wedding blessing for the daughter of the family).  The daughter was Princess Leia for several years — it seems like they may have even had to buy her a 2nd (bigger) costume as the years went by.  Our Dad’s were in the Navy and often out to sea, but I remember several Halloween’s when they were both home at the same time and the Dad’s were the ones that took the 5 of us kids trick-or-treating.  They brought their mugs with them — I think there were several homes in our neighborhood that had hot cider available for the grown-ups.  Now that I’m a grown-up, I wonder — do you suppose that cider had anything “extra” in it?

I think my favorite costumes for the boys was the year they were 2:  I made (made!) Eeyore and Tigger costumes: 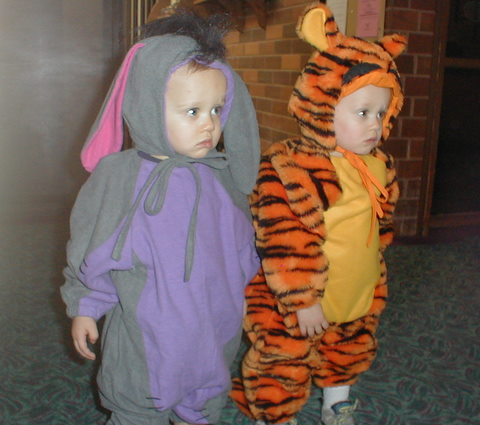 Look at them!  It doesn’t get a whole lot cuter than that.  I made those big enough that they actually wore them the next year,  as well.

Have a great Monday –