The boys had their first football game on Saturday. They lost, but I think they had a good time. No one got hurt and at least their team did make 2 touchdowns. I was worried they were going to lose even more badly.

Will is number 30 and Joe is number 54. They are both on regular offense — as Ends, and then they substitute for a couple of different defensive positions.

Everything happens so quickly — I couldn’t really tell what was going on. I did see Joe make one big tackle — the other team had one kid that would get the ball and go around the outside and just take off running (he scored most of their touchdowns). I did see Joe bring him down once, so that was kind of exciting.

Here they are on the bench, Dad is on the right. He was in charge of making substitutions. 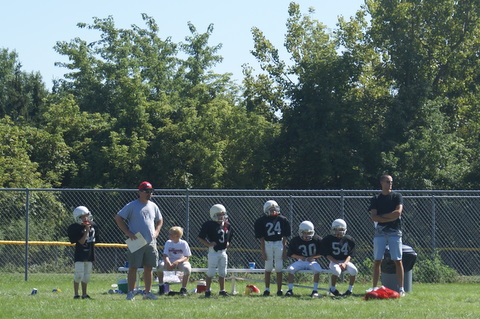 Here they are in the huddle.  For the first 2 games, an offensive coach can be on the field to call plays and to help coach the kids during the plays.  After that, they’ll be on their own. 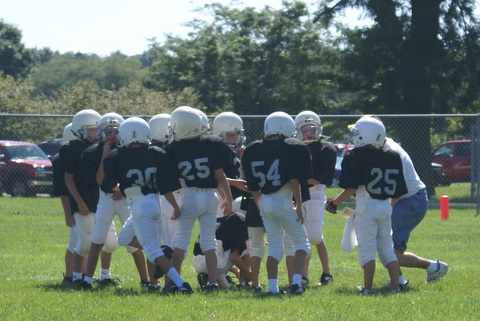 I would have had more fun at the game if I had brought a hat and put sunscreen on.  I wasn’t expecting it to be as hot or as sunny as it ended up being — and I have the sunburns to prove it.

In all honesty, considering the fact that 6 weeks ago 14 out of the 16 kids had never ever played football — I think our guys did pretty well.

But what do I know?

On Friday, during our shopping trip, one of the stores had some Needlepunch patterns and supplies, and the friends I was with were interested to learn more about needlepunch embroidery.  I explained it to them a bit — I had purchased the supplies and started a project awhile back, but it got stuffed in a box and became a UFO.  I was inspired to pull it back out over the weekend, and now I’m hooked!  I need to go get groceries, but I’m also going to have to make a stop somewhere to get some more thread, as I’m almost out of one of the colors I need, plus I can’t seem to find 2 of the colors.  At one time I had nearly every single DMC color they made — but my box that I stored them in fell apart, and unfortunately the little baggies of floss got scattered.

I’d better get hopping, I’ve got several stops I need to make on my big shopping adventure!

Have a great Monday!