You are here: Home / File this under: what was I thinking?

I have been spending some quality time picking things up in my sewing room. It started with a desire to see my countertop again, and to maybe clear a path to the TV (I could barely get there without stepping on…something(s)), and has now morphed into a desire to just clean the whole durned thing up properly. Ha. I get these urges every so often, they usually pass within a few days, but I’m still in the throes of this one.

In the process I have uncovered some interesting stuff. Like the fact that my scraps are multiplying. If you don’t hear from me again tomorrow, it might be because I’ve drowned in the scraps. 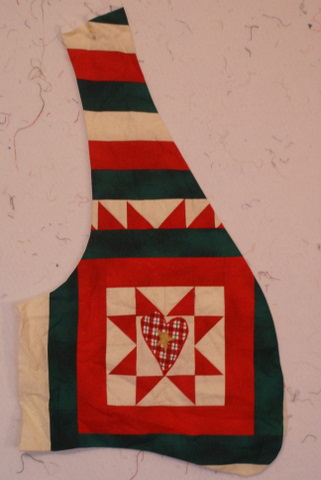 I mean, honestly. What on Earth was I thinking when I started making this? The fabric all has a teeny bit of sparkle, but yes, it pretty much reads as solid. And this is as far as I ever got apparently, as I’m pretty sure there isn’t a matching back or left side to this poor vest.

The question is this: what the heck do I do with it? Throw it back in the box so it can continue to breed more scraps with the other UFOs? Throw it away? What?

In addition to fabric folding and scrap sorting (OK, throwing them in a bin isn’t really sorting, but I’m sorting the scraps out of the other crap, right?), I’ve allowed myself to do some sewing: as I’ve uncovered things I’ve sewn some backs together, made some binding, and even attached a little bit of binding.

And, I finally put borders on this Lone Star I made several months ago. The center star has been done for ages, just waiting for me to be brave enough to do the mitered borders. Yesterday I sewed the borders on, today I sewed the miters down (by hand). I also made a back for this one, and I uncovered the fabric for the binding, but haven’t made the binding yet. I made the star with the preprinted QuiltSmart interfacing. It went together quite well.

Well, the scraps are calling to me again, so I’d better answer.

Please send a search party if you don’t hear from me tomorrow.