I’m sure this seems like an odd thing for me to be talking about. In all honesty this post was originally going to be a purely self-indulgent-look-at-how-cute-my-kids-were kind of a post.

But then I realized that it is quilt/craft-related and that some of you might be interested in the projects that are depicted in these pictures.

But first you have to read through the self-indulgent stuff. Hey, it’s my blog, I can blog about whatever I want, right?

So, the background of why I’m even bringing up the topic of ring-bearer pillows: as I mentioned before, my Mom and I went to a blessing of a wedding a little over a week ago. In preparation for this event, I printed pictures of my kids, my brother’s kids and my dogs so that I could show these lovely creatures off to family friends that we hadn’t seen for years.

On the way to the airport it dawned on me that I hadn’t actually managed to bring a picture of my husband. I had remembered the dogs, but not Mark. Oops.

I called my sister and asked her if she might have something she could bring. The picture she chose is one of my very favorites, of my husband and the boys at her wedding:

The boys were 3 years old. I was the matron of honor, Mark got to be the ring-bearer-shepherd. Aren’t they all adorable? Joe had managed to have a playground accident the day before the wedding, thus the cut under his eye. This picture was taken seconds before they were to head down the aisle. Mark quickly slipped into the church around the side and met them in the front pew with some new toys (maybe some tractors? airplanes?).

(Make note of the pillow pictured here, I’ll be coming back to it after I get through the rest of the self-indulgent stuff…)

Debra let me bring home the photo that she had printed and Mark and I were looking at it last night. He asked if we had any frames we could put it in. I was sure we did, but couldn’t find any in the first place I looked. I thought this was odd, as I knew we had lots of unused frames, but didn’t have any clue where they were.

“Oh, there’s a box in the basement labeled frames,” he said.

Holy crow! It wasn’t just FRAMES! It was FRAMED PICTURES! In our previous house, the family room was in the basement, and our bookshelves lined one of the walls. All of our family pictures were displayed on these bookshelves. When we moved 2 years ago, the pictures got all boxed up and Mark stuck them on a shelf in the basement of the new house. He was tired of dusting around all of the pictures, so he just left them in the box. I’m pretty dense sometimes, and it hadn’t yet occurred to me to go looking for all of them.

It was like Christmas going through that box last night! Ultimately, most of the pictures went back into a cupboard, because I was informed that if I wanted them out and on display *I* had to be the one to dust them.

One of the pictures that I uncovered in the box was of the other wedding that the boys were in the year that they were 3 years old. They were actually a week or so away from being 4 when they were ring bearers in Mark’s cousin’s wedding. They got to be ring bearers along with their cousin Ben (and Ben’s sister Lucy got to be the flower girl. Which is a whole ‘nother full circle story, because Lucy’s mom was the bride’s mom’s flower girl….). 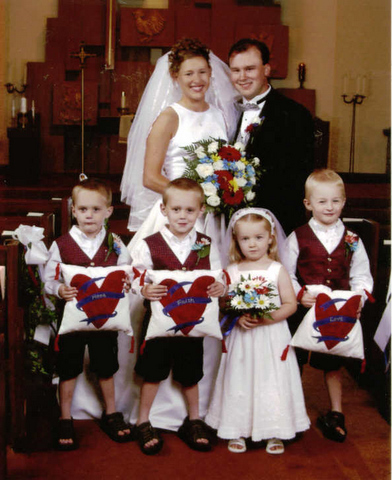 This one they didn’t have to wear tuxedos for, but they were still awfully cute. My mom actually made the vests for the 3 boys. They were a sparkly metallic red and blue plaid. Totally cute.

So about all of those pillows for the ring bearers.

For my sister’s wedding, my Mom and I worked together. Unfortunately I don’t seem to have any good pictures of the pillows themselves, but I thought I’d tell you what we did in case you ever need an idea.

I had recently purchased a Barbara Brackman book: Create your Family Quilt — she listed a variety of blocks that were associated with each state. We picked a block for the states that Debra and Matthew were born in — South Carolina and Michigan, and Mom pieced the 2 blocks in creams/whites. I think they were 12 inch blocks. I layered the blocks with a thin batting and a backing and quilted a feather design over the blocks. Mom made them into pillows for the boys to carry. I have to say that I do not know the current location and/or usage of these pillows — my sister reads my blog, perhaps she can comment. But Deb, if you don’t know where they are, I don’t want to know about it. VBG.

I thought it was a very special way to provide them with a custom keepsake. It wasn’t hard to do, and while most people wouldn’t need to make *2* pillows for ring bearers, some variation on the theme might work — there are so many blocks with interesting meanings, I’m sure you can come up with something appropriate.

So it was bad enough having to make 2 pillows for the first wedding, but the 2nd wedding required 3 pillows! I don’t remember exactly all of the thinking that went into the design process, but I know this: first, the color scheme was primary colors and second, and second, I wasn’t sure they were going to want to end up with 3 pillows to have to find a home for. So, the plan was that I would make these three pillows, and after the wedding take them apart and make the pillow tops into a wallhanging.

The heart and scroll design that I used was adapted from a Robyn Pandolph book (Stitched With Love). I don’t know if you can tell from the wedding photo above, but each pillow has a different word embroidered on the scroll: Faith, Hope, and Love.

The photos I have of the wallhanging that I made aren’t great, but here’s what it ended up looking like: 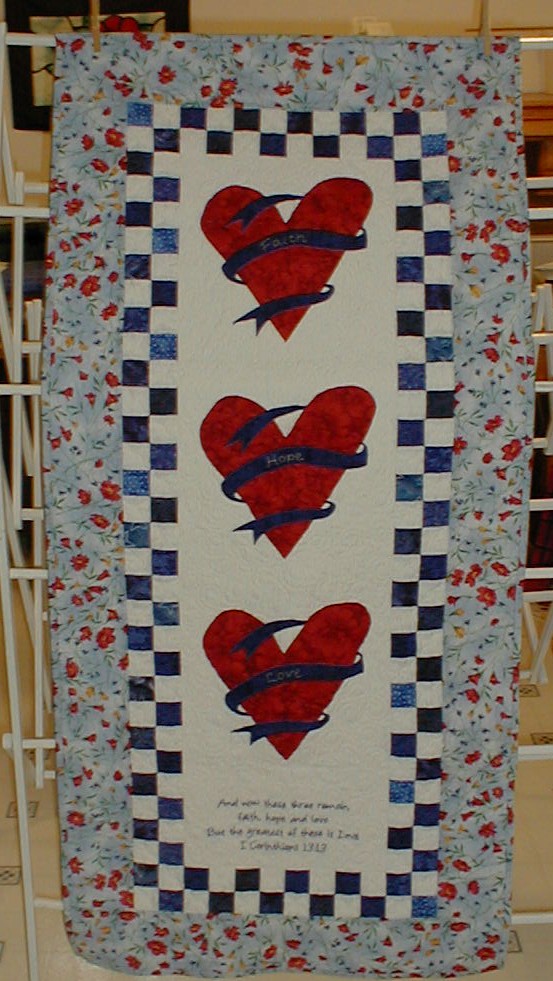 My mom got involved in this project, too: she got to embroider the verse from I Corinthians that got added to the bottom of the hearts.

Remarkably, I managed to get this wallhanging done in time to give it to them at Christmas time that same year!

Phew, that was a long post — thanks for hanging in with me through all of my self-indulgence. If you ever have to make a ring bearer’s pillow (or 2 or 3…) or even a gift for a wedding, I hope this gives you some ideas that you can use!