I think I’ve missed about a month of WIP Wednesday postings.  There didn’t seem to be much point to a weekly repetition of a post that said "I’m working on the book."

This week, though, I’ve got actual quilt progress to report on.  Not terribly exciting, since there isn’t a whole lot of change since yesterday’s posts, but at least I was able to spend a few minutes on it today — and today isn’t over.  As soon as I’m done posting this, I’m headed back to the studio. 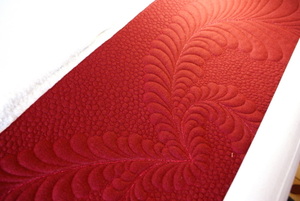 I am currently pebbling my way across the top of the heart.  It’s not terribly hard quilting, just mindless.  I’ve got Smallville in the DVD player and my headphones on.

The only really trick to pebbling is to make sure that you are making CIRCLES and not loops.  You almost have to think of flattening the shape out, if you don’t it is easy to fall into the trap of making teardrop shaped loops.  I’m using a really thin thread that matches the red wool pretty closely.  I want this part of the quilt to recede, a thicker thread would call too much attention to it.

I’m also contemplating some additional couching.  Here’s a picture of some testing I was doing off to the side: 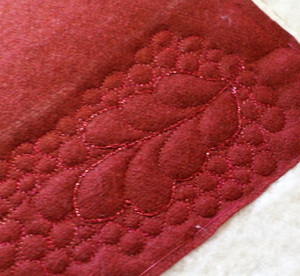 I’m thinking about couching the shiny metallic thread (which Vicki thinks might be from Madeira) around the outside edge of all of the feathers, in addition to having it down the spines the way it is already.   My Mom stopped by and was looking at it — she just shook her head in disbelief when I told her what I was thinking.

I told Vicki that I thought I had enough for the project, but now I’m wondering — I may need some more of this stuff after all! LOL!

And — I’ve decided to name it "Scarlet Amore" — thanks to Shelly for the title.  I will be getting in touch with Shelly  so I can thank her appropriately.

Back to work.  For awhile, anyway, before the cold I’ve picked up drives me to bed.

Thanks for stopping by!