You are here: Home / Blog / Other / Of piano recitals, tulips and birds

Yesterday was our piano recital.  I teach 3 kids, and my boys take lessons (from someone else…).  The other teachers and I decided to do a group recital day.  There were 3 sessions — my students and my boys were at the 3 PM session.  I think there were 13 kids playing at that session — a nice number.  Not too long….

I had been worried about the performances of my boys simply because they’ve been really silly at practice time lately.  Racing through their songs….goofing off….not listening to anything Mom has to say.

Thankfully, all of the children managed to do a wonderful job at the recital.  No major flubs, nobody being silly.  In fact, my boys, and my 3 students pretty much played their best at the recital, so I was proud and relieved.

Of the 13 kids at the 3PM recital, 8 were boys. Eight!  All of the boys seem to be drawn to the bouncy, jazzy type songs.  They were all very cute. The 13 kids ranged in age from 7 to about 10 or 11.  The teachers announced the name of the next performer, and then when they got up on stage, each kid announced the names of their songs.  After they played, they all gave a bow of some sort (head bob, slight bend at the waist…one of the girls even give a tiny curtsy).

Of course, I think the kids all thought the refreshments afterwards were the best part.  One of my boys said to me later "It was really annoying when people kept coming up to the table of performers and telling us what a good job we did."

At least no one was trying to pinch his cheeks or give him a sloppy kiss!

I’ve had trouble getting going this week.  The weekend was a little bit foggy:   Benadryl doesn’t normally make me drowsy, but this weekend, boy….I had several Benadryl induced naps.  It’s such a trade-off:  sneezing and watery eyes, or drowsy foggy brain?

I have been trying to get back into crafty/arty projects.  Today I worked on the "T" spread for the next Altered Book round robin book.  I’m not sure I’m completely done with it, but here’s where I’m at for now: 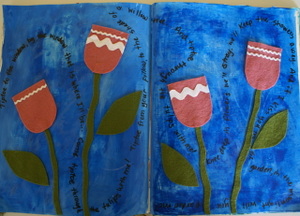 If you can’t read it, the text is from the song "Tiptoe through the Tulips"

I also made a bird: 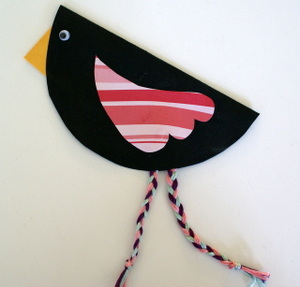 CarlaB has instructions on her blog (Feathered Fibers) for making this bird: she uses fabric, mine is out of paper.  I’m contemplating using it for a page in one of my upcoming altered books.  I discovered after the glue was dry that one of the leg is longer than the other.  It’s actually one long braid, and I thought I’d stuck it in with the two ends hangingout fairly evenly.  Oops.

I can’t remember the last time I actually cooked a meal, so I thought I’d surprise my family and actually cook something tonight.  I’d better get going on that……..