You are here: Home / A finished quilt (almost)

The binding is attached, but not hand-sewn. As far as I’m concerned, that means it is at a stage worthy of being shared:

I started this quilt in………maybe 2001? I’m not really sure. I think it was when we lived in our first house in here in town, which we only lived in for about 9 months.

I bought it as a kit — the pattern is Rosewood Cottage by Nancy Odom.

I got bored. The quilt is supposed to be much bigger, with appliquéd borders covered with vines and houses and other cute stuff. Actually, I think the problem was more that I had used a few different kinds of fusible web, one of which was really hard to needle. I fused all of the pieces, and then did a blanket stitch by hand. After I got this much done, I decided it was big enough and I sewed on some borders and then started to quilt it.

I had trouble deciding what to quilt. I tried a couple of different things, all of which got unsewn.

I pulled it out a few weeks ago and decided to do a feathered meander over it. I used So Fine poly thread from Superior Threads , which is a fairly fine thread. I think it’s a putty color, but it is slightly translucent, so it doesn’t look very obvious on the quilt.

I know, I know: I quilted over top of all of those different blocks and all of that appliqué with absolutely no regard. I don’t care. I love the way it turns out. Because the quilt is so low contrast, and because the thread doesn’t really show up, I don’t think the overall quilting interferes with the piecing or the appliqué. And I’m pretty sure that this way of quilting it was a heck of lot faster than trying to do a custom job that outlined everything and did something special to every block. Of course, I do believe that there is a time and place for that sort of thing, but I don’t particularly like doing it.

I finished the quilting last night and got the binding attached to the front. I suppose I should stop babbling about it and just show you the pictures: 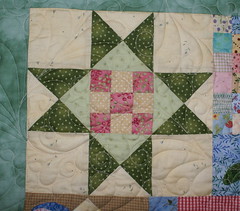 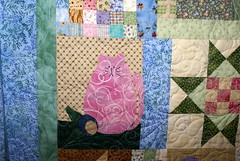 Thanks for coming to visit me at my new blog location. I know I’m a little crazy, but I like trying new technology. I’m impressed with what I see here at WordPress and hopefully I’ll stay put. For now.