You are here: Home / Blog / Other / Weather Report

I guess I’m not sure how much snow we got here in East Central Iowa.  Several inches accumulation.  It’s hard to tell in our yard because of the blowing snow — we have bare patches some places and drifts of several feet in other places.

Unfortunately, one of those drifts was right across the bottom of my driveway.  My DH’s big F-150 can get through the drift OK, but my poor Honda Accord was not up to the challenge.  I tried to shovel it so that we could go to the library and the post office, but it was too much for me.  Crusted over and heavy.  We stayed home all day.   Did I mention that the boys had a snow day?

I did make them go out for awhile.  It was cold and windy, though, so I didn’t make them stay out for too long.  Just long enough to get some fresh air.  Joe came back in covered in snow and I said "It looks like you were stuck head first in a snowbank."

His response:
"How could you tell?"

Here they are in their snow gear (before going out): 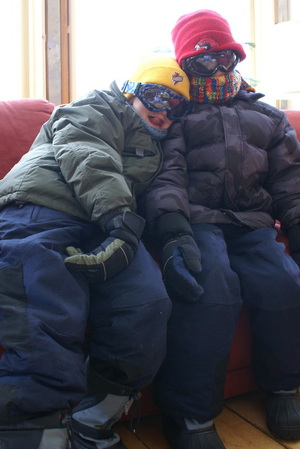 I spent part of the day messing around with paint and glue.  I don’t really have anything finished to show for myself, but I did get a lot done.  I signed up to participate in an Altered Book Round Robin.  I finally figured out (sort of) what I’m doing for that and spent part of the day working on it.  We are supposed to mail by the 19th….

Quilting Fitzy posted a question of sorts on her blog today — how do you get to sleep she wondered.  This one struck me — and I thought I’d share.  Aren’t you glad?  I’m pretty sure that my husband doesn’t do anything more than lay his head down on the pillow and he is out like a light.  Unfortunately, sleep doesn’t come that easily to me.   I have to do something similar to QuiltingFitzy (who thinks of the steps of a process, like making a quilt) — I have to think about something specific — anything — a quilt pattern,  an idea for my book, a scene in a movie, a fantasy….something to focus on.  As I think about that one specific thing I can fall asleep.  If I let my mind wander to everything else in the world, my brain starts to spin and sleep eludes me.  So how about you?  How do you fall asleep?