You are here: Home / WIP Wednesday #6

I think I said this yesterday:  how did it get to be the end of January already?  Where did the time go?

I’ve already shared much of what I’ve been working on over the past week.  I did go get a back for the Churn Dash quilt that I completed over the weekend.  I don’t know exactly when I’ll quilt it.  Soon, hopefully.

After taking stock of my works in various stages of completion, I realized that this other Churn Dash quilt was further along than I thought it was.  The smaller blocks are 4 inches finished.  They are all the way around, and where actually done and on.  I thought I still had to make some of those.  I got the borders finished on this one.  I’m not showing more of it because I’m still uncertain as to whether or not there will be some applique on it, and I’m also contemplating this as a show entry for this spring. 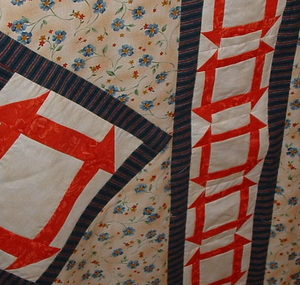 I read that Debra has quite a bit on her plate with service quilt projects, so I volunteered to bind the 2 orange quilts that Amy made, rather than sending them to Debra for binding.  I got one finished today, and the binding is attached to the font of the other.  It won’t take long until that one is finished and I’ll send them both back to Amy who will be delivering them. 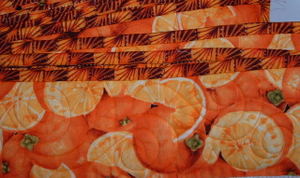 I just counted and I think I got rough drafts of 8 pages done for my book.  Only about a gazillion more to go….and then the editing….plus several pages of a class handout, so I did actually get quite a bit accomplished this week.