You are here: Home / Blog / Other / Growing up (and some fun task avoidance)

My boys jar of life experiences is still pretty empty, but they now have something new to add to it.  Dealing with a bully.  Actually, I think bully might be too strong a word for the current situation, but I’m keeping my eye on things.  Instead of bully, maybe "really annoying person" could be substituted?  Today’s episode included calling the boys "the ugly twins."  I think it kind of hurt Will’s feelings — enough that he actually told the teacher in charge of recess about it.  Just this morning we had talked about the fact that just because this annoying person calls you stupid doesn’t actually mean you ARE stupid.

We talked about it some more for awhile after school.  Later, at supper I said something about the boys being the CUTE TWINS.  Will agreed that MOM was probably right and that this annoying person was WRONG.

I keep telling everybody, having twins was hard work that first year, but that was absolute CAKE compared to this kind of stuff.  At least when they were babies I had complete control over everything.

Shortly after our after school conversation it was time for piano lessons.  It’s cold here, but not freezing — it was maybe in the high 30s/low 40s at the time.  If they were still babies they would have been bundled into heavy coats, hats, mittens, etc.  Not anymore.  Just sweatshirts.  I had to make myself stop my instinct to force them to put their coats on.  Pick your battles, right, Mom?

Speaking of growing up, guess who needs to grow up herself?  Why do I keep having to learn the same lesson over and over again?

The dreaded task that you are just SURE is going to take HOURS and be incredibly painful, in actuality will only take about 5,10, 15 minutes TOPS.  Plus, the relief in having the task done will far outweigh any tiny bit of pain you might feel doing it.

I have learned and RElearned this lesson countless times.  And I’m only 34.  Good grief.  Maybe I should print the lesson and pin it on my wall where I can see it from my computer.

So now, on to more fun things:

Button weighing report:  I own approximately 5 pounds of buttons.  (Not counting the 6 new pounds I reported on yesterday).  More than half of those, though, are buttons I got from an antique store in town last year.  I haven’t really sorted through them, but I’m not sure most of those are worth much.  Maybe later (when I need more task avoidance…), I’ll spend some time sorting.

So, I was half right — the buttons I’ve collected in small amounts on my own over the years add up to about 2.5 pounds.  My goal is to not just collect buttons, though — I’d like to actually use them!  Vicki made the mistake of mentioning eBay and buttons.  And then she sent me an e-mail with a link to an auction in it.  Oh my.  I’m not sure if I should thank her or not.

(I only ended up bidding on one auction, and I won’t allow myself to put in a higher bid, no matter what.  I just realized that the auction isn’t over until the end of the week, so I probably won’t get these.  Oh well, it looks like there is plenty more…..)

I’m using CorelDraw 12 to write/draw my quilting design book.  I bought the software last spring when I did the first book, and it has worked great.  I’ve been well aware that I’m just barely scratching the tiniest bit of the surface of its capabilities.  I played with the calligraphy pen tool for a bit. I was going to do my blog header with the calligraphy pen, but it didn’t turn out quite the way I wanted.  I did make the new header you see above in CorelDraw, but I don’t think I really had to figure anything new out to do it.   Well, except maybe to make it so that it wasn’t HUGE, but I fixed that pretty quick. 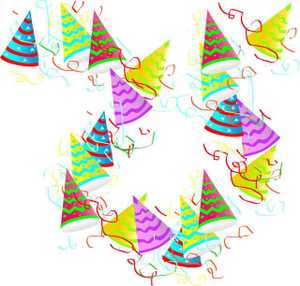 No, I don’t really know how this is actually going to be useful or helpful in my life, but isn’t it cool?

The drawing/painting tools actually act like the real objects — paintbrush, crayons, paint roller, pencils.  There’s metallic paint and GLITTER.  I was drawing a face earlier and was playing with layers and accidentally lost most of my drawing, so I was pretty bummed about that.  I’ll try again later.  I am using my Wacom tablet with it (I love mine…), and probably would be totally hopeless if I tried to use my mouse.  I’m a terrible mouse-artist.  That sounds really weird, but hopefully you know what I mean! 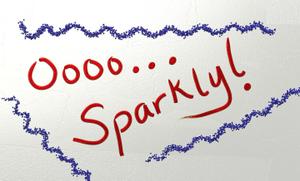 (Make sure you click on it to see the texture of the background.  In the real thing, some of the blue lines of glitter actually sparkle….)

Despite all of this task avoidance, I did actually manage to get several drawings for my book done, so it was not a completely lost day.  We’ll see what I can task avoiders I can find tomorrow. (VBG)