I haven’t done one of these in awhile — I meant to do it weekly, but I think I missed last week.  Or not.  I’m having trouble remembering.  I could probably go find out easily enough, but it would require moving my hands from the keyboard over to the mouse, and I’m not sure I have that much energy right at the moment. 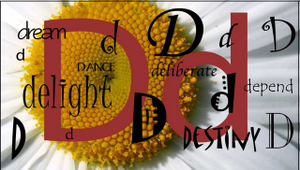 Dog — I’m definitely a dog person.  We have two — Katie and
Toby.  Katie gets all the attention because she is petite and cuddly
and cute.  She’s only a year old.  Toby is 10.5 years old.    He is a
beautiful dog — you can see a picture of him in the 365 Photos album
on the right.

David and Debra and Dylan — My brother and sister and
nephew.  David is 3 years younger, Debra is 4.5 years younger.  When I
was growing up I always thought it was kind of weird that they both had
names that started with "D," while mine started with "S."

Dad — My Dad lives with his wife on a sailboat in Florida.
When I was growing up, he was an officer in the Navy.   We wish we
were closer, but  it is kind of nice to have an excuse to go to Florida
every few years.  Of course, one of the things we like to do in Florida
is visit another "D" word…

Disney — Mark and I spent our honeymoon at Walt Disney
World.  It was wonderful.  We’ve been back twice with the boys.  We
went once when they were 2, right before Christmas.  It was a pretty
decent visit.  When they were 4 we went right after Christmas.  We will
never go at Christmas time ever again.  It was awful.  Only us and 1
million of our closest friends.  And even though it is supposed to be
the Happiest Place on Earth, there were an awful lot of unhappy people
there that day.  Including us.

Doughnut — A guilty pleasure.  A very rare (i.e. 2 or 3
times a year) pleasure.  Glazed or frosted with sprinkles.  No cake
doughnuts, please.  Give me the fat.

Dream  — Do you remember your dreams when you wake up?  I
rarely do.  I had a really weird one last week.  I can’t remember all
the detail, but I do remember that my DH and I were sleeping in
different bedrooms and I heard a noise.  I went to investigate and
discovered him sitting up in bed holding a 1 by 6 piece of wood that he
nearly beaned me with.  He had just been up investigating and
discovered that intruders had put all of our pots and pans on the
cooktop and then turned the burners on and left the house.  Weird.

Date — I may have mentioned this before, but Mark and I were
set up on a blind date.  He walked in, smiled at me, and I knew.  I’m
not sure he "knew" right away, but I don’t think it took long.

Dessert — One of my favorite desserts is just a simple dish
of ice cream.  We buy the 5 quart buckets of ice cream.  Not fancy, but
still tasty.  Lately we have been getting chocolate chip.  Yum.

Diapers — I’m so glad we don’t have diapers around anymore.
At one time I knew approximately how many thousands of diapers we went
through.

Documentary — I really enjoy watching documentaries by Ken
Burns.  His work is wonderful, and he manages to make me interested in
subjects that I would never have even considered thinking about on my
own.

Dance and Drum major — Seems like an odd combination,
doesn’t it?  This is something else I may have mentioned before as well
— I took dance lessons for several years while growing up, but quit
when I was in high school.  The reason?  The Drum major of the marching
band.  I joined the marching band because of a boy.  Very silly thing
to do.

DVD — DVDs are way cool.  TV shows on DVD are just about the best thing in the whole world.  OK, maybe not the best thing, but I still like them a lot.  I’m in the middle of season 1 of Veronica Mars, I just finished season 1 of Battlestar Galactica, I’m probably going to rewatch seasons 1 and 2 of Grey’s Anatomy soon.  Other favorites are Smallville, Farscape, The X-Files, Star Trek: Voyager.  We are going to start getting Star Trek: The Next Generation, but I’m not allowed to watch it until after my husband does.  Netflix and my wireless headphones are my friends.

DSLR Digital Camera — My current camera is a Sony alpha 100.  I only know how to use about 10% of its capabilities, but I’m learning!  I did finally break down and order a new battery charger for it today.  I’ve had to use my old camera for the last week or so, and it has pointed out how much I love my new camera…

I keep thinking of more "D" words to post about.  I could end up being here all night.  I don’t want to bore anybody, and I really need to go to bed, so that will have to do it for now.