My darling husband has been busy taking down the Christmas decorations, and I’ve been busy doing other stuff.  Not the least of which has been mucking around with ideas for my first 12x12x12 project.   I’m not really sure why I picked a Tree for my first one.  T is obviously not at the beginning of the alphabet….

I’ve been debating about how this is going to be interpreted in fabric.  At first I thought I’d just cut the tree out of fabric and applique it.  Then it occurred to me to try using a Snippet-like technique — cutting up tiny little snips of fabric and laying them out to form the tree.

Then, I had a head-smacking moment.  Threadpaint.  A "T" word, of course!  I think I may still cut the tree shape out of fabric in order to get the base color, but then I’ll have fun with thread.  At the size I’m using, it’s still not very big, so I’m still undecided about how to do the leaves.  I really like the addition of the red, too, so that’ll probably end up in there somewhere.  Oh, and I still have to figure out how I’m going to do the lettering at the top.  And what to use for the background….and I just had a thought —  maybe I’ll do the tree on some dissolvable stabilizer, and then applique the thread painted piece on top of the quilt sandwich??  And, and, and!!!!  So many ideas!

Here’s what I’ve been playing with today on paper:  I used some markers and an oil pastel and a watercolor pencil to do all of this.  I guess I could have let the paper dry before taking a picture (that’s what the shiny spot is in the blue).  The brown tree is a blown-up cutout of the tree I showed in an earlier post.  I traced it on the 12×12 paper, then colored in with a black marker.  It’s nothing spectacular, but it helped to see what the scale of my project actually was.  It is hard for me to work this small.  Not hard — just different — it’s good for me, right?  Character-building! 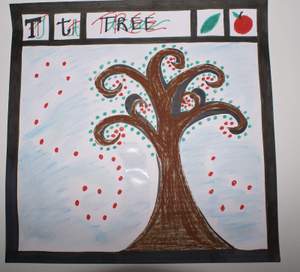