***The pictures are now working properly again.  Nobody did anything — they just started behaving themselves…..gotta love computers!

I started a really whiny post last night.  I saved it, but I’m glad I didn’t I didn’t publish it.  It was….really whiny….LOL….

Today, in the light of a new day, I’m feeling not quite so pathetic.  And the work in progress over the last week is actually stuff that is either done now, or almost done.

First is one of the teacher gifts I mentioned a few days ago — completely finished.  I really need to get a photography stand so I can take pictures that don’t have my area rug and floor in them (and that let me get a nice straight picture). 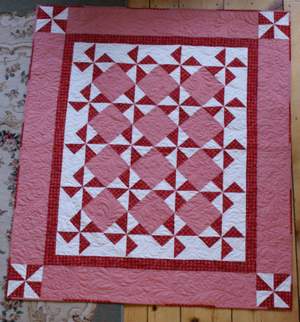 I mentioned before that this is a Thimbleberries pattern.    I think it is very cute.  It’s been pieced for ages.  I actually decided at least 6 months ago that it would be a teacher gift, so don’t ask me why I waited until 4 days ago to quilt it.

Here’s a close-up of the quilting.  You can click on the picture to view it in a bigger size, which will make the quilting easier to see.  It’s a variation of my Meandering Magic technique. 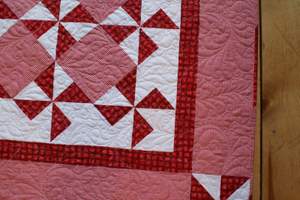 My second WIP is the other teacher gift.  It’s almost finished.  I have 2 sides of the binding completely done, and just turned the corned onto the 3rd side.  I’m getting pretty fast at the hand-stitching and between watching a good movie yesterday afternoon and talking on the phone with my friend Lynn the time passed very quickly. 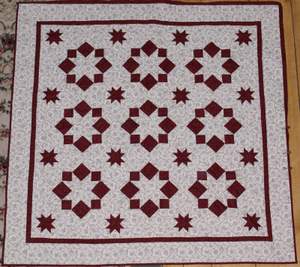 It’s probably been at least 2 years since I started piecing this one.  I got a customer sampler quilt that had this block on it, and decided I liked the block and wanted to play with it.  I like the way the large star is formed by the negative space, rather than being formed by a dark, as you might normally see it.

The light fabric is a black on white toile, and unfortunately, in the pictures I took, you are not able to see the quilting.  You can, however, see it quite well on the back of the quilt.  I did it a lot faster than I would ordinarily do, so it’s messier than I would like.  The quilt would have also benefited from some more stitch in the ditch (all I did was around the inner border, I should have gone around all of the red pieces), but in this case, finished is better than perfect.  Maybe I’ll do another one some day. (HA!)

Again, you really need to click on this to view it larger to really appreciate it.  I really wish I hadn’t used the red fabric on the back, but it was all I had over the weekend, and I really just needed to get it done.  I think it does look  better in person than it does in the picture.  Basically, I just started making freehand over the top feathers, and if I ran into a corner, I backtracked along the spine and started over somewhere else.  I did the same sort of thing in the border: instead of a continuous feathered vine, I just made short little sections that start in different places (some start at the edge, some at the inner border, some branch off another section) and just feathered for awhile, and then started again somewhere else. I have some other thoughts for today, but I think I’m going to separate them into a different post, because it is going to be the start of a series of posts….