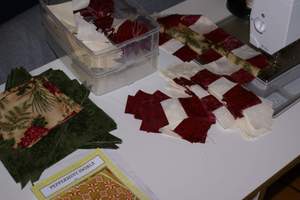 Even though I’ve been busy with Christmas, I have managed to do a few quilty things this past week.  I "let" myself start my new project (Peppermint Swirls) yesterday.  It probably won’t get much further than this for awhile, but it was fun to do something with new fabric and easy piecing! 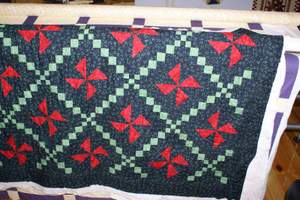 This is a quilt that has been pieced for several years.  The color is a little off in this picture.  THe green isn’t quite so light on the actual quilt.  I started quilting it, and didn’t really like what I was doing at the time (using Rail grey thread on the back — even with the grey thread it was nearly impossible to see what I was doing).  I did more of the quilting than I should have — note to self:  if you don’t like it after 5 minutes of quilting, you probably aren’t going to like it after an hour.

Another note to self:  don’t leave projects half quilted for more than a month or two.  Your style changes and you’ll think of a better idea.

Yet another note to self:  just because it is your own quilt, doesn’t mean it deserves custom quilting, especially if the quilting won’t show up….
Off and on over the past few days (watching TV…) I’ve been frogging the existing quilting.  It’ll probably take me until next Christmas to do that (the back is black, and the stitches are hard to see on that side, too…. 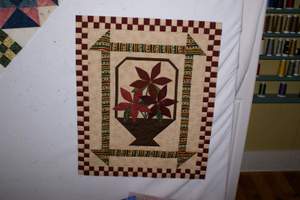 And last, but not least — I quilted this wallhanging that I pieced in Fall of 2005.  It might be finished by Christmas 2007.  That is, if I can find the 3rd strip of red binding fabric that wasn’t with the quilt top and the other 2 strips of binding.  Maybe Christmas 2008.

Well, I need to shut down so we can head out the door.

Have a great Wednesday!