You are here: Home / Blog / Uncategorized / M is for Museum

I started writing a really sappy letter reflecting on the past year, but decided that it was really too silly to publish.  Instead, I’m going to show you a picture of what we did this week.  The main event was a trip to the Field Museum so that we could see the real Sue.  We were able to see the replica and the accompanying exhibit last year when it was in Cedar Falls, IA.  I’m not sure how impressed the boys were by the real thing.  The crowds were a little overwhelming, so that may have factored into their impression of the experience.  So, here is proof that we actually did see Sue (along with a gazillion other people…) 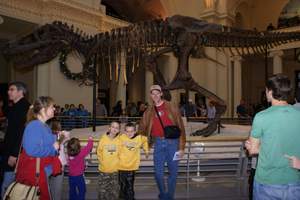 The part that I think they liked the best was the Underground Adventure exhibit — visitors are "shrunk" to 1/100th of their original size and get to go underground and experience dirt and bugs from that point of view.  They had some really amazing creatures in the exhibit.   I won’t post any here, because they are really kind of gross when viewed at that scale.

To get a sense of it, though, here is a picture of the boys with an acorn that has sprouted — the shoot going up, the root going down. 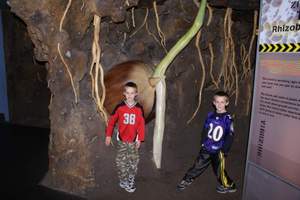 Only one thing in particular caught my eye in terms of wanting to a photo to remember it for future art ideas — I wish, though, that I had written down where exactly I was in the museum.  I think it was somewhere in the Evolving Planet exhibit, somewhere back before the time of the dinosaurs.  Something about these leaves really grabbed me.  I think the photo is pretty good, too.  I love my  new camera…. 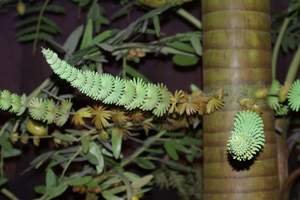 Well, it has taken me nearly all afternoon to get these last 2 pictures to upload.  Don’t know what’s wrong with the connection.    And now it is time for me to go — my in-laws are coming to play games with the boys while the DH and I go see the new 007 movie!  Can’t wait!  Just got back — it was wonderful — I thought I published this, but apparently I just saved it as a draft.  Oops!