I have had an extremely productive weekend.  So productive, in fact, that I decided to focus on what I was doing and skip blogging about it until after it was over.

I’ll get to the fabric crisis mentioned in the title in a minute….

On Friday, I managed to finish up the monster quilt that I was complaining about in the previous post.  The quilt has since been delivered and the customer was very happy.  I did not take any pictures, as I prefer not to have photographic evidence of those sorts of quilts.

Saturday was full of cleaning fun.  Or something like that.  My studio and office have reached the point where the chaos is seriously impacting my ability to accomplish anything, so I dug in.  Literally.  My studio doesn’t look a whole lot better, but I’m trying to be systematic about it, and really sort it out, rather than just move the piles around.   We also got our Christmas shopping done Saturday night.  Well, almost done.  Just one or 2 more things here or there….but the bulk is done.  Now comes the wrapping….

I did also manage to make 2 things on Saturday.  One is a gift that I can’t share a picture of yet.  The other is kind of silly and only took about 5 minutes, but…it’s red and I made it.  I have been using my car key with no key chain for about forever, so yesterday I pulled out some beads and a charm and made myself a quick key chain thingie….

Today (Sunday) was going to be another day of cleaning fun, but it occurred to me that if I want to give the boys’ teachers quilts for Christmas, I had better get them quilted, um, NOW….

So, off I went to the cupboard to retrieve the tops that I had set aside several months ago for this express purpose.  I set them out on the floor and the boys happened to wander by.  Joe said "I hate them."

Excuse me??  Keep in mind that I had not asked for opinions, nor had I actually said anything about them at all.

I told them what I had in mind for the quilts.

Will allowed that Mrs. K. would probably like the other one.

The one for Mrs. D. already had a back pieced and the binding made, so I decided to start with it.  The quilting went pretty fast, and it looks pretty good, I think.   Actually, the quilting went remarkably well — the borders had been applied well, it was nice and flat and square and I was sure patting myself on the back.

I pulled it off the frame and started to attach the binding.  I had to restart the binding because I assumed it was cut 2.5 inches, but quickly realized that it was only 2 inches cut and needed a 1/4 inch seam instead of the 3/8 in. seam I was trying to use.  Usually I make the wider binding, but since I had made this so long ago, I could remember why I had only used 2 inches.  My suspicion was that perhaps I was running low on fabric and this was all I could do.

I rounded the 3rd corner and thought, "Gee, there doesn’t seem to be a whole lot of binding left."  So, I stopped and did a little test run of the rest of the binding.

I did decide to go searching through my scraps to see if there was any possible way I could find a small bit of this fabric.

This is one of the bins that I keep scraps in.  By scraps, I mean little bits of leftovers from various projects.  Small bits.  There are some orphaned blocks in here, and the occasional large hunk, but mostly it’s little bits.  The scary thing is that this bin is not the only bin.

The scariest thing is that when I opened it and dumped it out, this is what I was faced with.
I’m sure that you won’t be surprised to find out that I did not find any of the fabric I was looking for.  I also discovered that I was unable to squeeze all of this fabric back into the same bin it had come out of.  It grew!  Like a monster!  It was actually kind of interesting to dump it out and paw through it for a short while.  I can barely even remember some of the stuff that these scraps go to.  I wish I have been better at documenting the quilts I make.  I need to work on that going forward.  Hopefully this blog will help.

In a completely different pile, I found about a 1/3 of a yard of one of the other fabrics that I had used to make the quilt, so I punted.  I took the binding I had already sewn on back off.  I cut the original binding and the new binding into 2 by 10 inch strips.  I sewed them together with diagonal seams and wound up with: 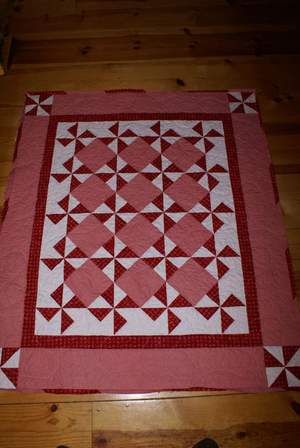 It’s OK, and might have even been better if I had used shorter strips.  Actually,  I guess it’s kind of hard to see what it looks like in this picture.  I need to take better pictures of it tomorrow in the morning light.

It’s a cute quilt — it’s a Thimbleberries pattern from one of the original books — Peppermint Swirl.

In addition to all of that mess, I also spent time today working on Mrs. K’s quilt.  At this point, it is on the frame waiting to be quilted: 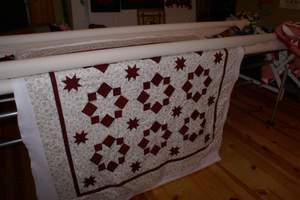 When this top went into the closet it was just the inner body of the quilt.  It was only 48 inches square and while it might have been OK to leave it that way, I decided that it really needed to be bigger to be a usable lap quilt.  And now that it is done, visually I think it works better.  For me, at any rate.

I’m not entirely sure how I’m going to quilt this one, or what thread color I’m going to use, but hopefully I’ll have a finished quilt tomorrow night to report on.

And if that isn’t enough, I actually did something else this afternoon related to a gift that I can’t talk about (yet), but as soon as I can, I’ll post some pictures.  It’s pretty fun.

Just thinking about everything I did today is making me sleepy, so I guess I’d better toddle off to bed!