You are here: Home / Blog / Uncategorized / A Look Back

My readers who are also members of Longarmchat.com (which is probably most of you…) have already read and seen most of this, but I can’t think of anything else to blog about tonight.  I intended to get here sooner, but had a busier evening than I expected.  My phone hardly ever rings and I got 2 phone calls from people I wanted to talk to. And I was supposed to be quilting, so I guess I’ll have to work extra hard in the morning… 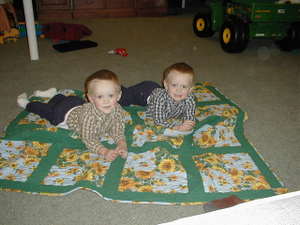 After the delivery guy set it up and made sure it worked, we loaded up some muslin.  I’m pretty sure that first muslin is long gone….after I filled it up, I loaded up a real quilt.  Nothing fancy — just did a meander.  You can’t actually even see the stitching in the picture, but weren’t my guys awfully adorable when they were just 2 years old?  Look at the diaper sticking out the top of Joe’s pants. 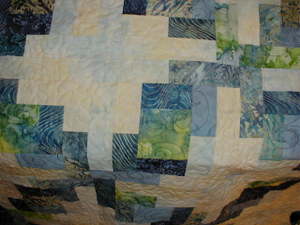 Shortly after that, I loaded up a quilt that I had made for my Dad.  I don’t know if I was brave or stupid, but I did it!  Not only was it batiks, but I went for a semi-custom design.
He lives on a sailboat and I wanted to make a quilt that was water colors that sort of blended together and looked like the ocean.  I was very proud of this quilt, but sometimes I wish I could have some of the old ones back to requilt.  It’s not that I’m ashamed of it, but I have so much more experience under my belt — can you imagine what it would like now if I could do it again?? 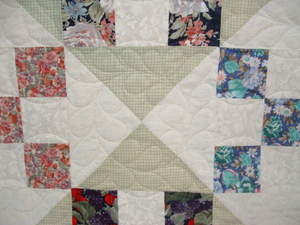 Fast forward to 2004 and the arrival of my A-1 Elite.  I can’t find my notebook that would tell me exactly which quilt was first off the new machine, but this one could very well be it.  It’s from the correct time frame.  Again, not a bad job, but my style has definitely changed.
This was a Quilt of Valor that I quilted in September of 2004. 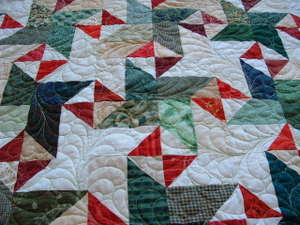 Here’s one that is probably familiar to many of my readers — this is the cover quilt from my book Meandering Magic.  The picture is from 12/02/2005 — almost exactly a year ago.  I had no idea when I quilted this one where it would lead me to.  I didn’t think I was being all that innovative when I dreamed up the quilting design.  I’m still sure that there are lots of quilters that do something similar, but I’ve been very blessed by the quilters who have wanted to learn about how I quilted it, and have been interested in all of my other ideas for how to extend the technique.  I should mention that the piecing pattern is from Bonnie Hunter and is called StarStruck. 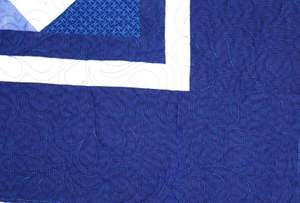 Last, but certainly not least is the most recent piece to come off the frame (just last night, in fact!).  I mentioned it in my previous post.  The design is my freehand version of a pantograph called Feelin’ Groovy, designed by Terri Watson and Michelle Wyman.

As always, you can click on any of the pictures to view them bigger — they always look better bigger…In fact, I insist — you can’t see the quilting at all unless you click on them!!!

Thanks for joining me on my look back at the last 5 years of quilting.  I never could have imagined the adventures that the purchase of a quilting machine would send me on.  I can’t wait to see what the next 5 years bring!