Most of you probably know about the Fiberart For A Cause fundraiser in which artists from around the world created fiber postcards.  These postcards were used as thank yous for a $30 donation to the American Cancer Society.  The project has raised over $110,000 in just 18 months.

My friend Lynn got to go to Houston this year to Int’l Quilt Market and Festival, where the postcards were available. I asked her to make a donation and pick out a postcard for me.  I received mine today, and I’m very excited about what she picked: 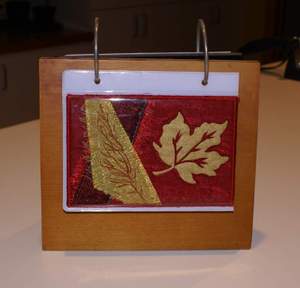 Keep in mind that she picked this out for me almost a month ago.  Do you suppose she could see into the future and know that I would be on a red kick right now? (Thank you, Lynn, for picking out such a cool postcard for me…)

A few weeks ago, somebody somewhere (on one of the many lists I belong to) was talking about how to display fiber postcards.  One of the ideas was a photo album-y thing they had gotten at IKEA.  Well, guess what!  I have one just like it, only mine came from Target about a million years ago.  I had only ever managed to stick one picture in it (there is a frame on the other side that flips over, but I wouldn’t use it on the postcards, as it "mats" it to a smaller size).

Now all I need to do is fill it up with more postcards!  I’ve thought about joining the art2mail project, but I think that involves more postcards than I can commit to making at this time.

How’s this for a deal: if you send me a postcard to fill up my frame, I’ll send you a postcard in return.  If you are interested in trading with me, send me an e-mail and I’ll give you my mailing address!