I’ve spent parts of today playing.  I wanted to experiment with freeform crochet.  My friend CarlaB has made several freeform crochet scarves and now that I’ve got a small stash of red yarns, I decided to play.  Mine was looking nothing like hers, so I asked for advice.  I’m being far too rigid and not nearly free enough, so I’ve started over and will see what happens next week.  I won’t have much time tomorrow, or over the weekend, so I’ll put that on hold.

One thing I did do that is semi-finished and fun was load up some Superior Dissolve on the longarm, lay on a bunch of pieces of my new yarns, pin a second piece of Dissolve on top and then stitch it all together.  I think I need a thicker dissolvable stabilizer, because I had a few issues, but was able to work around it.

It was very cool to stick it in the sink, rinse out the Dissolve and have the following piece appear: 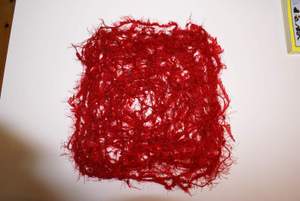 I have quilted up some blue wool that I’m going to try to attach this to.  I’ve been playing with that this evening.  I’m messing around with adding beads as well.

On the QuiltArt list last week there was a discussion about "gratuitous bling" and the use of embellishment in art pieces.  I think some people got the idea that some of the comments were suggesting that people who use embellishments are not actually making art, they are just throwing junk on fabric and calling it art.    On the other side, I have gotten the impression that some people think that in order to make an art quilt you MUST embellish.  I was glad to see that the conversation didn’t degenerate into too much of a fight.   I’ve never done much embellishing — not much room for it in the very traditional quilts that I have always made.  Who knows — maybe I’ll play for awhile and find that all of the goodies I bought will just sit in a box and never get used again.

I think the main point I got out of the discussion is that whatever you choose to do, do it well.  If you are going to embellish — you want to avoid going over the top, but it’s almost worse to underembellish.  My water lilies is a case in point — I considered adding more beads to the background, but I could tell very quickly that it was going to take a LOT in order to do what I thought I wanted to try to do to it.  At that point, I wasn’t willing to make that kind of commitment to a project like that.  I’m very happy with how it turned out, but I can see other ways I could have gone with it.

My piece Alice’s Head went through several stops and starts as I decided how much to commit to the beading and embellishing.  I think the current piece will have to go through the same thoughtfulness.  Trial and error and experimentation.