This project started out as a red project, but I quickly realized that the red fun fur was too much.  It occurred to me that the pastel rainbow fun fur I was using for a different project (which I will probably never finish…) would look much better.  I was able to do this in front of the TV a few nights, plus a couple of hours at the quilt show on Sunday while we were just sitting around (it was pretty slow on Sunday at the show…)

I just did a row of double crochet with the fun fur, and I also changed out the buttons.  And Look!  The buttons don’t even match (well, they are all pink…but…you know what I mean!)

The sweater used to belong to my Dad.  I stole, er, borrowed it from him when I was in high school.  I’ll bet that he doesn’t even remember it.  Do you suppose he would like it back? 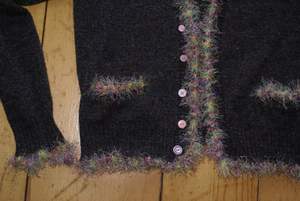 The title of this post could also be "Imitation is the Sincerest Form of Flattery" as this project is inspired by my friend, Carla.

She posted pictures of 2 sweaters that she had altered with some crochet and I thought "Hey!  I can do that!"  And then I thought "Hey!  I have the perfect sweater to alter, too!"  So, thanks, Carla.  I’m getting some of my best ideas from you….