This quilt is based on the poem Jabberwocky by Lewis Carroll.  I made it as a challenge from the group Fast Friday Fabric Challenge (see link at left).  The idea is to create a quilt based on the challenge in one week.  I’m about an hour from the deadline as I write this post, so I’m feeling pretty good about that!

This month’s challenge was to create an abstract piece that evoked an emotion and used the design element of texture.

When I first read the challenge and the poem, I didn’t quite know what to think, but someone in the group provided a link to a Wikipedia entry about the poem.  It had a list of some of the nonsense words from the poem and their definitions, as well as a quote that described Alice’s response to the poem:

“Somehow it seems to fill my head with ideas–only I don’t exactly know what they are!”

I was also taken by the words themselves and intended to go in a more whimsical direction.  My piece was going to be colorful and was going to focus on the words as words, and not as part of a spooky poem about monsters and other weird creatures.

Everything took a different turn, though, when the black fabric I started with underwent some discharge dyeing with a Clorox Bleach pen.  I did this part right before Halloween — who knew the black would turn ORANGE????  Not me!

So — I went with the weirdness and spookiness of the whole thing. The second picture is with the flash off.  It’s a little bit out of focus, but you can actually see the texture of the quilting a little better. All of the nonsense words are quilted in the black between the orange spirals.  After quilting those, I went back and added the spiky filler.

I had several false starts on the bead work.  I didn’t actually have very many black beads, and what I had and started with just wasn’t enough — either in quantity or in variation.  I visited a craft store and got a package (or 2) of every small black glass beads they had, and then went to town making all of the bead stacks.  I was trying to add texture and continue to depict the notion of the weird ideas swirling around in Alice’s head.

My children asked if they were supposed to be snakes — some of them surely could be!  Some are corkscrews (one of the creatures in the poem, the Tove is a combination of a badger, lizard, and a corkscrew). 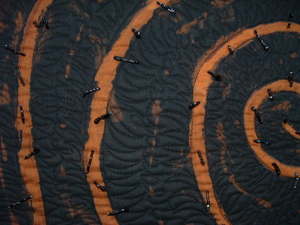 The final textural detail is the binding, which is actually flannel.

Unfortunately, I don’t think the quilt photographs very well — it’s pretty subtle.   Technically, there are some things that I would like to have done differently (i.e. I hurried on the binding and it doesn’t look very nice.  Also, I can’t quilt words upside down very well, and it wasn’t until part way through that I figured out how I could have made those neater…).

I don’t know if it “works” or not — but I enjoyed doing it, and look forward to a new challenge.