You are here: Home / Blog / Other / Never say never

The other day I posted some pictures of sweaters that I think I need to make for myself.  I have mucked around with some different stuff, but not really committed to anything.

At the time I mentioned that when I picked up knitting, I wasn’t erally interested in knitting sweaters.  I was purely in it for the non-body-part-fitting objects like bags and scarves.

I’m pretty sure I probably said out loud at some point that I couldn’t see myself wanting to knit socks.  I was going to leave that for my mother.

I’m about an inch away from finishing the leg and then will need further instruction from my Mom about what’s next.  This is the same yarn I made that hat out of that I posted a few days ago.  It’s washable wool, but it’s a worsted weight, and I’m using size 6 needles, so it’s going much faster than, say, size 1 needles with sock weight yarn.  These’ll be nice heavy socks for wearing with boots.

Most of that knitting was done yesterday:  on the way to the football game, waiting for the game to start, DURING the game, and then whilst hanging out with some friends after the game.

Our boys lost their football game, but they did better than last week, so that’s something anyway.  My guys were in on some good tackles.  Whoa.  I never thought that a sentence like that would come out of my mouth (well, fingers…).    Who would have thought that my children being part of dragging other children to the ground would be a cause for celebration.

Our team is made up of 6 4th graders and 10 3rd graders.  The 3rd graders are all brand-new to football this year, so they still have a lot to learn.  So do the 4th graders, of course, but at least they have a tiny bit of a clue.

Will is number 52.  He’s nearly a head taller than everyone else. 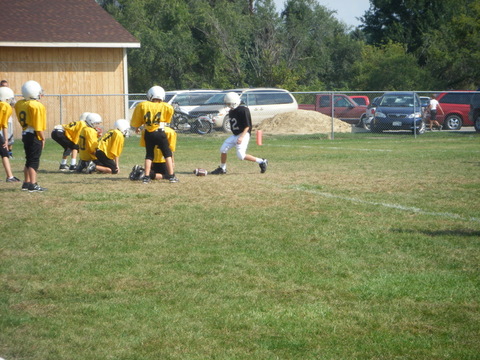 The rest of the team is still in the huddle.  Will, the center, has to head out out first to get set on the ball.  He’s very good at hustling over there and getting ready.  Last year’s center would mosey over, and nearly always have to turn around and ask what the count was.

Those two tall kids on each end of the defensive line?  Yeah, those are mine.  Tall suckers, aren’t they?  Yeah, I know the other kids are crouched down, but still! 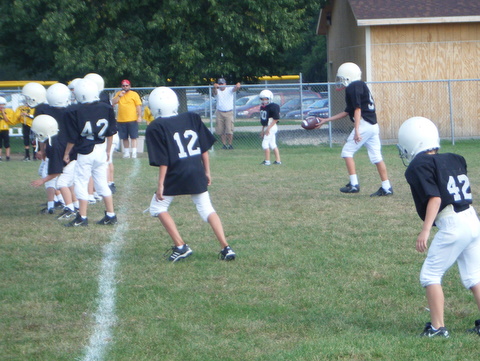 Joe’s got the ball, getting ready to punt.

So there you have it. I never thought I’d be knitting a sock, nor did I ever think I would be writing about football.  And here I’ve done both in one day.

I figured out how to get decent copies of my zine

I have finished knitting 24 blocks and I am done.

To finish the month, I decided to just do some wat

This were my catch up pages. I made a bunch of wat

It will come as no surprise, I’m sure, that yest